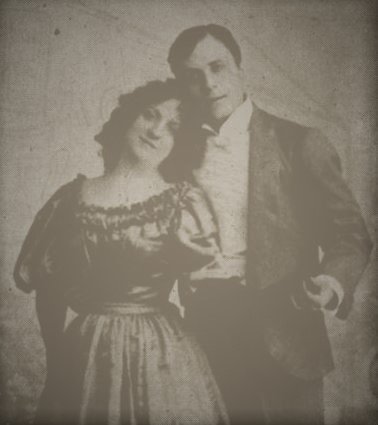 The Allisons (James and Lucy) began their performing life in the early 1880s. James Allison’s eccentric dancing, comedic timing and contortions developed during the Legmania craze that hit the music halls in the late 19th century. Lucy’s acrobatic skipping dance and her sweet voice made them a perfect comedy duo. James started his performance career as a ballet dancer in the opera chorus. Lucy had been performing in a juvenile dance company before landing the part of Columbine in the pantomime Hop O’ My Thumb. By this time James had already been Harlequin at a panto at Drury Lane and they met performing Harlequin and Columbine in the harlequinade at Theatre Royal in Rochdale.

The Allisons have been described as eccentric dancers for the whirlwind Corkscrew dance perfected by James as part of the act but they blended a routine of highly skilled dance, comedy and song. Audiences and critics were amazed by the speed and ‘machine like’ actions and fascinated by Lucy’s skipping rope dance. James & Lucy Allison were active in performing for over 25 years between 1880 and 1908, with the majority of their performance career spent touring internationally including America, Australia and New Zealand. Their skits included a surprise element where they start off dressed as an elderly couple but burst into frenetic dancing with Lucy’s high speed skipping. According to newspaper reports wherever they went it was always a crowd pleaser.

Marriage – James and Lucy were married on 17th September 1883. James was 24 years of age and Lucy just 17 years old. They started performing as a duet as The Allisons (James & Lucy) the same year.

“Former member of a well known theatrical team, died late yesterday at the home of her son James”

NOTE: This site is first and foremost a family history journey to re-discover James & Lucy Allison and their son who is professionally known as James Eadie and his wife Cissie Ramsden. It also hopes to delve a little deeper into the lives of other performers who wowed the audiences with their eccentric dances and physical feats. I will continuing adding blog posts that map their lives and explore the acts and people they met along the way.